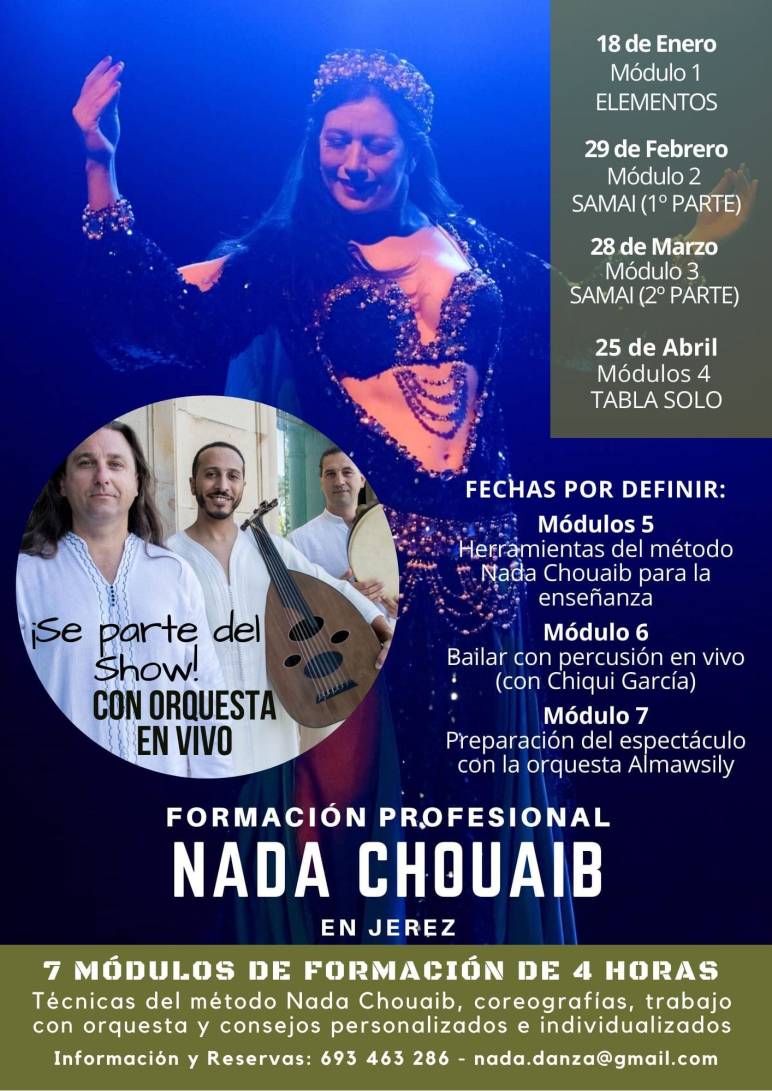 Very happy to anounce this new collaboration : Tatiana Coelho will teach Flamenco, Nada Chouaib Oriental dance and they will collaborate for a beautiful Fusion choreography. Waiting for you this summer in Jerez, the cradle of flamenco! All information on demand.

Do you know why Aleppo is called OUM EL TARAB in the Arab World? “Oum el Tarab” means the mother of Tarab. The word “Tarab” comes from the Arabic verb tariba, which means to be emotionally moved, or shaken by a beautiful music or poem. It’s a complex emotional state, described by the classic Arabic authors as the point where joy and sadness meet. Several authors report cases of fainting, loss of consciousness, or even death provoked by this ecstasy. As the essence and supreme purpose of Arabic music, Tarab became synonymous with classical Arabic song and by extension came to define this musical genre. As we can see from both ancient literature and many present-day accounts, Aleppo has been recognized for its great voices and its expert audience since before the time of the Arabic dynasties in Syria.

→ THE MOST KNOWLEDGABLE AUDIENCE
Derived from the Arabic verb “same3” which means “to listen”, “Sammi3a” refers to the most experienced connoisseurs among the already expert audience found exclusively in Aleppo. The “Sammi3a” are erudite listeners especially renowned for their astute musical judgment. They are the arbiters of musical taste and an artist’s potential passport to fame. A famous story tells of the great Egyptian composer Mohamed Abdel Wahab taking his first professional steps in Aleppo during the early 1930’s. At the time only a rising star in Egypt, Abdel Wahab was hired to perform for 2 nights at a theatre in Aleppo. It was his first time in the city of OUM AL TARAB, and when he arrived at the theatre on his first night, he was disappointed to see only a few attendees at the gallery (maybe no more than seven in the huge theatre hall). Despite his disappointment, Abdel Wahab put on a great performance. On his second night, he arrived at the theatre and … surprise!!! … there were more than two thousand people in attendance at the gallery while another two thousand remained in the street as tickets were sold out. He asked his sponsor for an explanation for this drastic change at the gallery and he was told: “Those who came last night were the Sammi3a. No one in Aleppo attends a concert unless the Sammi3a has approved of the artist, and since they were impressed with you, tonight the whole city came out to hear you.” After that, Abdel Wahab became one of the biggest stars in Middle Eastern music, not just in Aleppo but all over the Arab world. This story illustrates that in the Middle Eastern music scene, no one can become famous without the blessing of Aleppo’s Sammi3a. Since ancient times Aleppo has been – and remains to this day – the ultimate point of reference for knowledge and good taste in Middle Eastern music and Tarab throughout the Arab world.

→ ALEPPO, GUARDIAN OF THE TRADITION – THE BENCHMARK FOR ARABIC MUSICAL TRADITIONS AND RULES
Another beautiful story about Abdel Wahab tells of his meeting in Aleppo with another legendary composer, Omar Al-Batch (1885-1950), who composed great pieces that became part of the classical repertoire of Aleppo. Abdel Wahab headed to Aleppo seeking information about Muwashahat. At an evening reception where all of Aleppo’s best musicians had gathered, Abdel Wahab asked if anyone was familiar with Muwashah in Maqam al Sikah (a particular mode / scale of the classical Arabic musical system.) It was quite an exotic request as far as Abdel Wahab was concerned since in Egypt the Sikah mode was not just uncommon but had been considered lost for a long time. Omar Al-Batch answered “Not only are we familiar with it – we’ve got a full suite (Wasla)! Of course, we cannot play it now because at this time of night, the planets are unfortunately not properly aligned.” and so he asked Abdel Wahab to come back the next morning. When Abdel Wahab left, the musicians, embarrassed, asked Omar Al Batch, “Why did you say that? We don’t have any Muwashah in that Maqam, what are we going to do now?” “Well,” answered Al-Batch, “it’s unthinkable for a city like Aleppo not to have any pieces in that mode, so I will compose some.” That same night, he composed not one but three Muwashahat and taught them to his musicians and singers. The next morning, they performed a full suite of Muwashahat composed in the Maqam al Sikah for the whole gathering including Abdel Wahab, who was astonished by this music. This story reminds us that even in 20th century Aleppo there still remained a composer capable of creating new and complex music following the traditional rules on the use of Middle Eastern musical modes (or scales) as well as musicians capable of learning and then performing it in just one night. Furthermore, it highlights the prominent role of Aleppo and its artists as guardians of Middle Eastern musical traditions and as the essential point of reference for musical culture in the Arab world generally. Today Abdel Wahab and Oum Kalthoum are widely considered to be the quintessential artists of classical Arabic song. Through their achievements seized upon by the media and the cinema of the golden era, they inspired many generations of artists. Abdel Wahab, Baligh Hamdi, and other great composers devised many innovations and incorporated them into the tradition thus creating a new song style capable of invoking Tarab alongside the canonical ones. Their successors adopted this new style and the new long song format without knowing the classical one, the Wasla, which has been lost almost everywhere except Aleppo. Just like the Andalusian Nawba but unlike the long song forms, the Wasla is a vocal and instrumental suite comprised of many parts using many different styles and a wide-ranging emotional palette. Its finesse and sophistication is inspiring and its diversity can enrich our dance. Furthermore, the Wasla from Aleppo has the distinguishing characteristic of always concluding with some “Qudud,” which are happy songs typical of Aleppo that invite the audience to dance. For us dancers, it’s a beautiful repertoire to explore! Aleppo’s music still has a lot to teach us about Tarab and ultimately, about ourselves.
Sadly, due to the war in Syria many Aleppo artists have had to move abroad where they continue to spread their art worldwide, but Aleppo remains OUM Al TARAB – “the mother of Tarab”.

Big thank you for the corrections and additional information to the lebanese diva Amani, Antonio Frijones and Inmaculada Sanjuán Luna 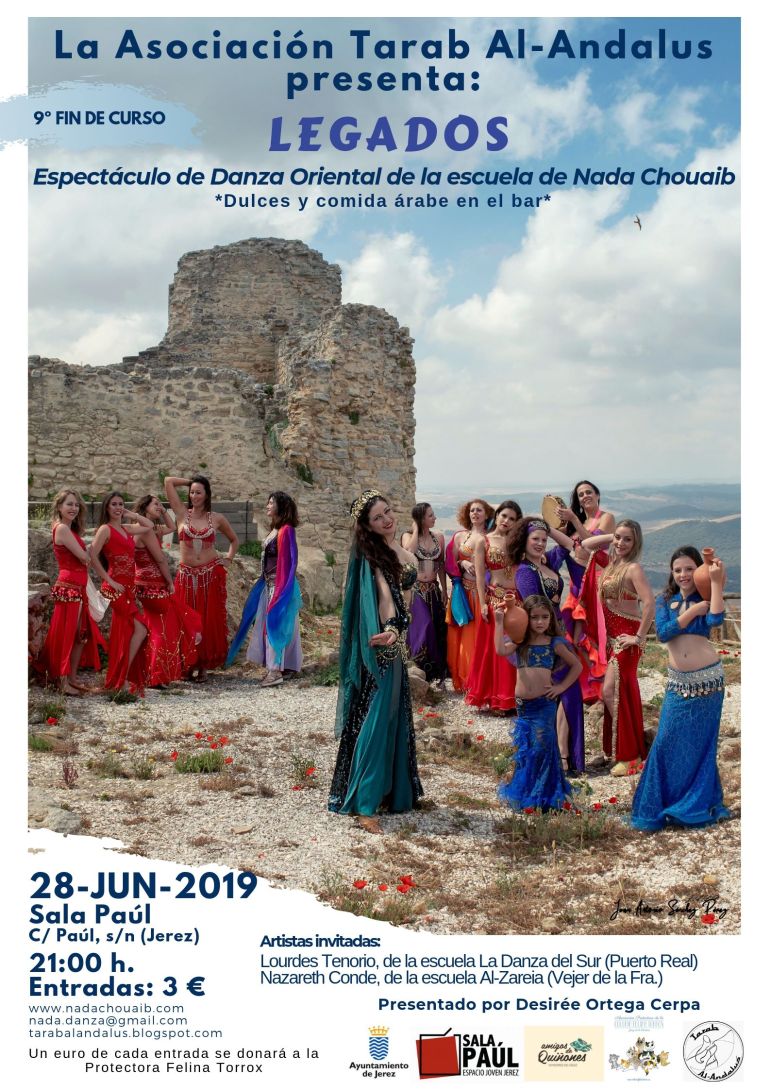 From 20th to 25th of august. LAST PLACES!! Some options are SOLD OUT.